Anyone have these sensors? I got pair from Vesternet initially; later I got another pair via Amazon. But noticed some comestic differences on size of the sensors holes (bottom left n top right) which is rather strange.
The one on the right with the larger holes came from Vesternet.

The spec n models look identical. So curious if anyone knew which one was the new revised one? curious which sensor is like yours? 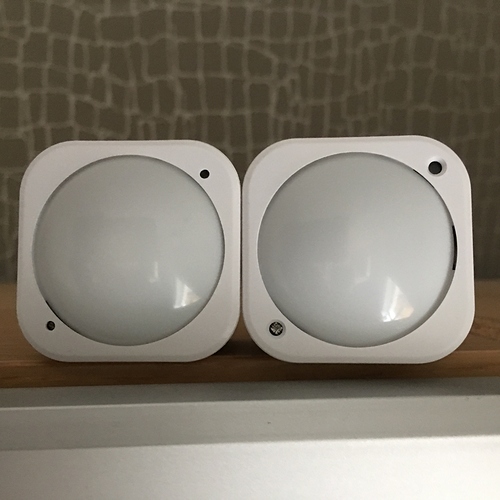 Do both the sensors have an LED? I have never come across one that looks like that on the right hand side, all of the ones that have come through our shop look like the left hand side one. That other one does look quite strange, does it have any labels or serial numbers on it (it might be in the battery compartment).

Box model numbers are all identical…However, having sent Aeon Support an email about the 2…They said the one with larger holes is the latest one…was revised to allow more light thru the sensor

And they released a firmware update for them in December too:
https://aeotec.freshdesk.com/support/solutions/articles/6000036562-multisensor-6-firmware-update-12-14-2017-
It includes “Improved accuracy of lighting sensor”