Would it be beneficial or had anyone setup multiple motion sensors in the same room such as living room and run the identical functions and routines. Was just a thought because sometimes it finicky and picky but thought this idea might improve it.

I have multiple motion sensors in my lounge and upstairs hall.
I have CoRE pistons set for ‘Any’ to trigger things.
I did initially have single sensors but found this to be not enough.

Cool so it is beneficial even if doing the same routine and or others. I just thought by adding more it would have a greater chance of detecting and triggering events even if there the same. I’ll give it a try thanks for the input.

Here is part of a piston I have.
As you can see I have 2 motion sensors and if ANY is active, it will be true. 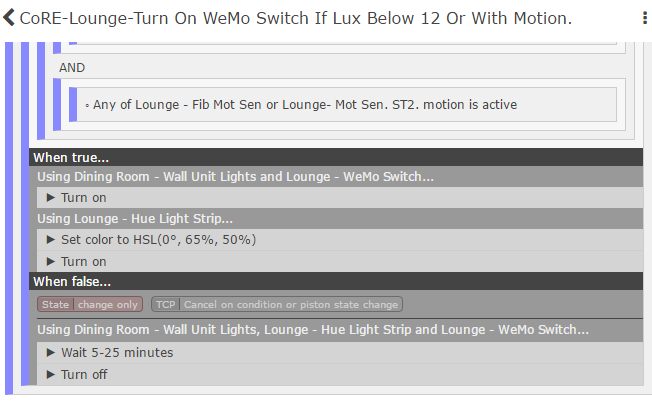 Try this multi sensor solution by a community member:

I find it beneficial to have multiple motion sensors in rooms for a variety of use cases. I’m focused mainly on occupancy and presence intent, not security. Security is much easier, since largest coverage line-of-sight (LOS) is often the intent.

Motion triggered bedroom lights + nightlight:
One thing that can be a PITA is figuring out the best positioning for a single motion sensor that can function as an occupancy light trigger while also performing as a “bathroom run” nightlight trigger without triggering from restless sleepers.

I have found that the safest place for a single motion sensor is low to prevent triggering while sleeping, but is easily triggered by feet/legs. Sensitivity of the sensor, line of sight and pets become an issue with such a simple solution. This type of placement also fails for activities like in-bed reading where the motion sensor cannot detect occupancy.

Using two motion sensors can resolve some of those faults. With one placed high, having full LOS of the entire room, and one placed low, non-sleeping movement within the room can be confirmed by the two sensors. Additionally, the reading light/tv occupancy conditions can be more easily determined.

It’s not perfect, by any means, but it can help you get a decent 80/20 solution.

For example, I have an open great room with LOS to two additional rooms and overlooked by a stairway and landing. If I wanted to determine motion in either of these functionally-distinct areas, I would have to use corners, walls and nooks to try to creatively limit LOS.

It becomes a bit easier when I also combine creative placement with multiple sensors in each area to create virtual “walls” and triggers based upon multiple sensors being simultaneously triggered to attempt to determine occupancy context.

This can become fairly complex quickly, especially in cases of multiple occupancy, so it’s best to keep your logic and implementation as simple/limited as possible.

Those are just a couple examples of how I use multiple sensors in one room/area.