Hi everyone… I am about 1 month into my smart home initiative and thought i would share a really cheap way to control everything using a really inexpensive android ‘burner’ phone. This is a work in progress but thought others may find it to be a useful solution. This was inspired by @florianz project with the Amazon Fire 7.

Basically, i found a really cheap LG Transpyre android no-contract phone from BestBuy selling currently for $30. I bought three of them so far, one for each room where we spend a lot of time.

The ones i bought shipped with Android 5.1.1. I was impressed with how fast they are… There is no lag that i have noticed. The screen is very nice and bright and it comes with a removable battery. The battery seems to last a good long time when configured optimally for this use case.

The dumbing down of the android configuration is really pretty simple, and so far has not required root:

Obviously this is just the tip of the iceburg of things you can control with android, but i think this arrangement is going to contribute greatly to the WAF. I have a harmony hub on the way, which i found on fleabay for $55, which i hope to fully integrate into my ST and home entertainment systems.

Anyway, as of right now, i have a very clean looking remote that wakes up when i double tap the screen. My dashboard comes up immediately, without any swipe or unlocking. It goes to sleep after 30 seconds of inactivity. The battery lasts a long time on a charge. I’m pretty happy with it so far.

Hopefully this is useful to some of you! 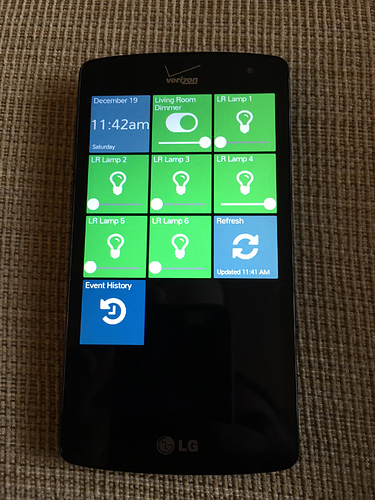 Hi Josher, nice set up, I see you are double tapping the screen to activate…

The app is https://play.google.com/store/apps/details?id=org.motion.detector which will only alarm for detection, but the developer has a plug in to wake the screen… its just quite cool for the tablet to come on using proximity

Thanks for the tip… Any idea how this motion app affects battery life? I’m going to have to play around with this!

This would also be perfect for if/when i decide to just slap these things up on some walls around the house, like @florianz is doing.

On a similar note, that makes me want to try out something like a movement wakeup app, like this:

​WakeUp Unlocks Your Android Phone When You Pick It Up

Android: There are lots of ways to unlock your phone, but many are fiddly. WakeUp unlocks your handset when you pick it up and hold it at the right angle.

Hi Josher, I have mine on permanent charge, I noticed that if I kept the screen on 100% of the time the charge would not match the drain, hence using the proximity app…

I would presume the proximity app would prolong battery life (as the screen drops out) but cannot prove this, as the motion detector may/may not use the battery up, although, the events can be timed (which is cool) to say,…

As you are running on battery all the time, you would have to have a play round with it to see what was best…

Just for info: it does not work in the dark (I presume the camera cannot see anything in the dark) but if I switch the lights on the tablet wakes up… so it can see light???.. interesting…

Solution to phone/tab camera not having night vision would be solved by having lights set to come on as you enter the room with a PIR. You walk in at night and lights come on ( as they should anyways) and that light actions would also wake the screen on the tablet.
Only issue I have with mounting an old phone as a permanent controller with smart tiles is the screen size . With 10 tiles as shown in your picture it is fine. However when you have 80 tiles for all your devices and actions it really helps to have the 6,7,10" screen from a tablet. I’ll take the $35 kindle over the $30 phone just for that reason.
I have a Kindle HDX 7 and Moto Xoom 10" mounted as a CCTV monitors on 24/7 and never have an issue with the screen being on drawing more than the 1A changer can maintain . Yes if somebody takes it off the charger and kills the battery, then I need to put it on a 2A charger to build the battery back up, before I put it back on the 1A to maintain it.

Good point there… I’m bummed i missed out on snagging some of those fires last month. Just curious, how did you go about mounting those tabs?

I plan on putting Qi charger on a metal plate the wall and attaching Qi receiver ( http://smile.amazon.com/Ocr-Wireless-Charging-Universal-receiving/dp/B010USS7P6/ ) to them and using magnets. So It can still be taken down if wanted.
For now I just used double sided tape ( https://smile.amazon.com/gp/product/B000BL5INM/ ) on the 4 corners and ran the charger cord along the wall to outlet.

This is quite interesting…
Hi RLDreams, I wonder if the tablet that makes the difference, you have a Moto Xoom 10" and can maintain the screen on a 1A charger… I have an old Cube 9X 9.7" and a 1A can’t hold it up, I fit a 2A and it was still not holding it up (although a lot slower to go dead) that’s why I use the motion detector so the tablet can go to sleep whilst nobody is there.

Is your screen on your Xoom permanently on?

Xoom screen is on 24/7 as CCTV monitor, using the factory Motorola charger ( the Xoom have /had their own charger port, not USB ) . It has not been unplugged in almost 2 years at this point, except for a few minutes here and there, so for all I know the battery if fried by now. I’ve had a few Moto phone batteries blow up ( not explode ) on me that were docked 24/7 . I never noticed until I tried to do something and touchscreen was acting up. So I went to take it out of the dock and the case had expanded enough to wedge the phone into the dock. Now I replace the battery every year or so.

This is quite interesting…Hi RLDreams, I wonder if the tablet that makes the difference, you have a Moto Xoom 10" and can maintain the screen on a 1A charger… I have an old Cube 9X 9.7" and a 1A can’t hold it up, I fit a 2A and it was still not holding it up (although a lot slower to go dead) that’s why I use the motion detector so the tablet can go to sleep whilst nobody is there.

Is your screen on your Xoom permanently on?

You can also use this auto dimming app called twilight. This will also help keeping the current draw down when dimming is on. I know the motion sensor app is a battery hog.

Filters blue light from your screen, reduces eye strain and helps you slee...

Thanks for the answers… RLDreams it seems you have a result for permanent live wall mounting tablet, if it hasn’t been unplugged for several months it seems the best way to go… I will have a look at a Xoom…

The Xooms have been out of production for a couple years, but do have the updates to 4.1. Since they were the Motorola /Vzw flagship alternative to Ipad. I only paid about $100 each for them about 3 years ago refurb off contract. Which still can’t be beat for a 10" 32Gb 4G tablet . I really don’t care if they say Verizon on the back LOL
Best bet would be to check out FleaBay

Not bad at all, as you say, don’t care what it say’s on the back

I wish someone would find a way to root the “wink” panel they sold as that is powered by the mains power and wall mounted. that would rock as a simple ST panel

I forgot (have not tried it) is Tasker able to wake screen of an unrooted phone/tablet?

Yes, at least on the couple of Nexus devices I tested on (eg. Nexus 6P, Nexus 9). Note that it will not unlock your device, so you’ll need to have the lock screen set to none, but I don’t see that being a major issue for a dedicated dashboard device.

If leaving the device unlocked is an issue, you could implement a custom lock screen - maybe even something that had some basic status information could be displayed but keep security controls locked down.

It only has a rear camera but it has Android 4.4, a charger and a 4 Gig memory card.

I works good as a dashcam.